Also this night was very calm. The rubbish collection came in the morning, direct next to us of course. Then the Mc Donalds opened finally and we could get breakfast… coffee and a cheeseburger for me and 2 hamburgers for Julia :)

Around 10 we packed together and was ready to go… but just around the corner, to the Lidl next to it. Here we filled up our stocks and went back on the street, in direction to the Dune du Pyla. It was still 200 km to drive.

The route was leading us through all the little villages there. And every 500 meter a roundabout. Roundabouts are a great invention, but when there is one every 500 meter then is it annoying. It was going on like that for the next 40km. Until we reached the freeway finally. Now we could travel faster again.
Just a few kilometers later we were in front of a tollbooth. But it was forbidden for Inge to lead us via toll roads. I guess they were rebuilding a freeway into a highway with toll and Inge didn’t have it in the system yet.
Ok, 1,80 Euro are still a good price and we could travel faster. Later we had to pay again 1,80 Euro. Therefore we were in 3 hours at the Dune.

On the access road to the parking we could get a small view on the 100 meter high sand dune. The Dune du Pyla is the biggest shifting dune in Europe. Over 2km long, 500 meter width and over 100 meter height. It’s shifting around 1-5 meter every year.
We parked the Kangaroo on the parking and went straight to the dune. It’s amazing to see such huge pile of sand. So much sand and no sand mold… :) (It’s a saying) 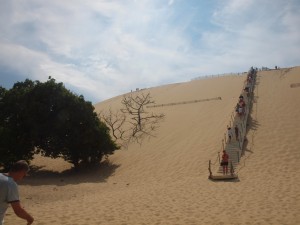 There are even stairs up on the top. We went up the steps (it’s really exhausting) and was standing a few minutes later on this sand hill and had a great view around, the bay and the rest of the dune. The dune looks from the top like a small desert. Just the temperature is more pleasant. :) 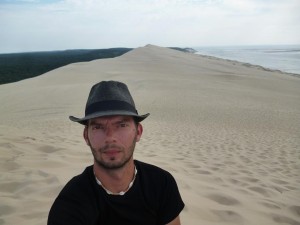 We was sitting (and lying) at least one hour on top of the sand mountain, before we went back down. But this time we was running the dune down… in the sand. One time running down a dune… fun, fun, fun! :)
After viewing the dune we went souvenir shopping. What else? :) We found some special postcards, which look like a bottle message. Practical, especially here. Because it is great to fill some sand in it and to send it then. :) But these ‘postcards’ are expensive, so just my most beloved people will get one. :) I was sending so many postcards already, I can’t see postcards anymore…

Actually we also wanted to eat an ice cream there, but be was wasting too much time with other things… the ice cream house was closed already.
So we went to a parking place, which 2 other camper, which we met on the dune, recommended to us. After all the usual camping places shall be a place which is free of charge. When you drive the street parallel to the Dune du Pyla, then you will pass 4 camping places. 2-3 km after the last camping place you’ll see on the right side a place with several campers. That is the place. Not far from the beach, with (dirty) toilets and some restaurants near to the beach.

We met the both people from the dune again here and parked next to them. A father and his daughter. They also make half a Europe trip, just the other way around. He is German and his daughter is half Sri-Lanka and half German.
We were talking with them for quite a while and went then to bed. … Before 12, premiere for us :)

We slept until half past 10 today. Another premiere. But it was really good. Fresh and well rested we started in our day today.

And the whole day went like that. We didn’t left the place today anymore. The whole day just relaxing. I wrote a bit for my blog and Julia relaxed in the hammock. Like that we wasted the whole day. Another resting day where we could relax.

In the evening we invited Amanda for a BBQ. Amanda is the lady which we met the day before on the dune. Together with her father. Amanda is just 17, be we hit it off. She is a beautiful young lady, without being smug and also with brain. In this age is that combination rare. So we decided to spend some time with her, that she can experience something without her father. To do something with ‘young’ people.

One hour before sunset we packed the BBQ stuff together and went to the beach, to make there a nice pick nick with BBQ at sunset. Very nice!
On this day was also a national holiday in France and everywhere we could see, far away, some fireworks. One of it last for at least one hour. It wasn’t ending anymore :)

Around midnight it became a bit cold at the beach and we went back to the cars. We brought Amanda save back to her ‘home’ and went then also to bed.

The night was ending at half past 9. Of course we wasted time, arse around till 5pm. I was talking with Amanda and Julia went away with Friedrich somewhere… for around 2 hours. We was worried already. But when I was looking after them, I found them just around the next dune and they were talking and talking. 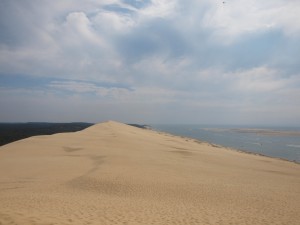 Some when they came back. We said good bye from both and went to the Dune du Pyla another time. We had to collect sand for the ‘postcards’. :) After we went to the café again and was finally eating our ice cream. Ok, I had a discussing Cappuccino and a Crepe with Nutella.
After it we went to the other side of the bay. It was good 80km to the Cap Ferret. On the way we stopped for 2 hours at Mc Donalds. I published quickly another article. The one for south Portugal. Slowly I start to be long behind with the articles. But what to do? I don’t want to spend all my time just to write and translate my articles. Then I’ll not do anything else anymore.

After Mc Donalds we went to the Cap Ferret, to the other side. It was almost dark when we arrived at the end. We got a quick view on the Dune du Pyla from the other side.
Here was a restaurant, which was just closing. But luckily it has an open WLAN, which was also on in the night. So we converted on the parking and used this free service for a while, till we fall asleep some when. 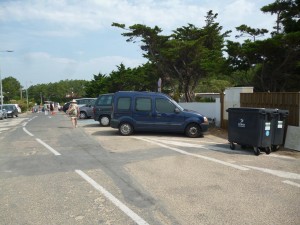 We got up very late today. Around 10 maybe. It was already high life at the Cap Ferret. A lot of people were there already. We went first of all to the restaurant and ordered a coffee. Ok, Julia a cacao, because she don’t drink coffee.
The coffee was 4 Euro (even it was better than the one yesterday).

After we went to the beach and had a look to the dune by daylight, from the other side. From here it looks much smaller, as if you are standing on top. But still big.
A boy just brought a huge jellyfish on the beach. That was another highlight, even a sad one. 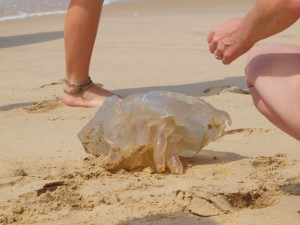 We packed our stuff and went back. I needed urgently cigarettes, because my one finished. But that is not that easy in France. Just special shops are selling cigarettes and they are well hidden. We was asking in the next village for such a shop and they was sending us through half of the village… but we couldn’t find the shop. We drove further and I found one direct on the street. 6,70 Euro per package… there is it better to stop smoking. … I bought 2…

Half a chicken we bought as well… we were hungry.

Then the big question… what to do now? Actually we wanted to go straight to Paris, to visit a friend from Julia. But during a phone call yesterday we got informed that the friend will be first in 5 days in Paris. Now we have 5 more days to fill up in France. What to do?

We decided to visit a small island in the north. I wanted to go till the Bretagne, but this detour would have been too far, said Julia. The tires are at their limit already, from the profile. So, the island.
I told Inge where do we want to go and she was calculating the route … and we started. But first to the next Lidl… our drinks was almost empty. We needed urgently supplies and got them. Actually we wanted to try a local store… again not. Next time.

Inge told us the way… until another bay. But suddenly we found us in front of a ferry, instead of a bridge. And they wanted 29,50 Euro to bring us to the other side. To drive back was not a solution, because this bay went down till Bordeaux, where we just came from. And to drive 300km back cost the same then the ferry, at the end.
So we had to pay the 30 Euro and went with the ferry. Again something new… but too expensive for our budget. 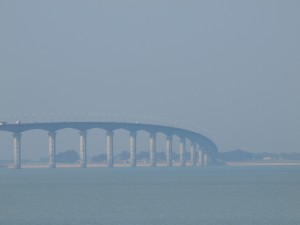 Finally we arrived and could drive on. Until the bridge to the island. Now they wanted again money, for the usage of the bridge… 16 Euro. They are really mad. This time we turned around and didn’t drove on the island… and didn’t pay. Just before the toll house we turned around and went to the next camping place. But it was full. Not our day today…

But the nice lady from the restaurant was so friendly and let us takes a shower and we bought therefore a cacao and a glass of wine. But a wine on an empty stomach is not a good idea. So we are now on the parking place of the camping place and will stay here for the night. We got also this permission from the nice bar lady, even it is probably not in her authority. But it doesn’t matter for us. It is a great place to sleep.

Gordon on the dune