The night was very calm. I was afraid that someone from the camping place will come to shoo us away. But nobody came. We got up very relaxed at 9:30. I drunk a coffee in the café and used the clean toilet of course.

After we packed everything together we went back on the street. First of all down to the sea again. It was just around the corner. To say Good Bye to the sea. From now on we would drive in the country side and wouldn’t see the sea again.
We sat down on the stones and was just looking on the sea for half an hour. While we were sitting there I found shells of oysters between the stones and collected some as souvenirs. :)

And then we went back on the street. On the country roads through France. The rest of the day we were just driving. With one stop at Carefour (supermarket).

Around 6pm we went again to our favorite restaurant. First of all we were eating something and I had to work urgently. We stayed here until they closed. My work took longer than expected.
Just before they closed I ordered another burger and a milk shake. That was the vengeance of Mc Donalds. One of both wasn’t good anymore… my stomach was against it. Just ‘pity’ that Mc Donalds just closed… I had a funny evening…

My stomach was healing a bit over night… but not fully ok. I dared to get a coffee… no burgers or shakes anymore.
We went away there very quickly… before other bad things would happen.

Also today we were most of the time on the road. Target was a place just before Versailles. I found a lake on Inges maps and told her to lead us to this point. It was working fine, till the last turning. The field road was overgrown. No way to pass it. :( So, to the next lake. I wanted to sleep nice calm direct on a lake.

Also the next one we couldn’t reach. Here was a sign which told us that it is the end of the road and further is it a private road. Using prohibited. Later we realized that it was the lake of the golf course :D 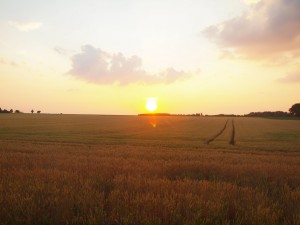 So, we were moving on, until we found finally a nice place direct next to a field. It seemed to be a great alternative place and we parked here.

To mark the occasion we took a shower… this time our own. A shower out of the bottle. We had enough water with us. And we went fresh (thanks to the field shower) to bed. :)

Our field place was a good idea. Nobody disturbed us in the night and the trees behind us were spending shadow the whole morning. Thanks to that we could sleep long this morning and the alarm clock was first at 10 am ringing. What a great morning. We enjoyed it extensive at the field and started first around noon.

Target today was Versailles. The city with the probably most known castle in Europe. The castle of Versailles, in which the treaty of Versailles was signed.
Versailles was just 10 km from our sleeping place away. But first of all we needed urgently petrol. So we went to the next cheap petrol station. Good that petrol stations from supermarkets are reliable. We went to the next Carefour petrol station and got the good 95er for 1,52 Euro per liter. Mostly you’ll find only 95er with E10. But Julia didn’t want this stuff for the Kangaroo.
Also in France is makes every petrol station its own prices. We recognized price differences of over 10 cent in a small radius. 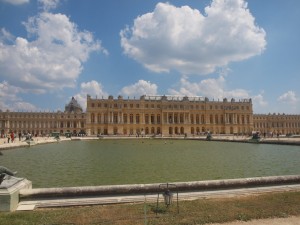 Then we went finally to Versailles. I was afraid that it will be busy on the street, but it was more or less relaxed. We didn’t drive much through the city. The castle is visible from far away already. But first of all we needed a parking place. Which we found very quickly. Not direct in front of the castle (even there were also parking places), but therefore one with a parking ticket until the next day. So we had also a place to sleep in the night. It’s not allowed to stay there with a camper, but we are not a camper ;) 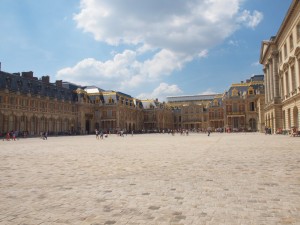 It was late already when we started to the castle finally. Around half past 3. The first point of interest was … Mc Donalds of course. Just quickly eating something and then straight further to the castle. Around 3 we were finally at the castle. And this is a castle! It’s huge. The courtyard is huge already. And it was full with people. Julia even realized in this crowd a line of waiting people, which I didn’t realized. And the line was huge as well. We went to the ticket office and the guy said that we will wait approx 30 minutes, to get into the castle. The alternative is the gardens. This would be free.
After a we were thinking a while about the opportunities we decided not to spend the 16 Euro for the castle and to visit the gardens first. We could come back tomorrow morning to see the castle itself. 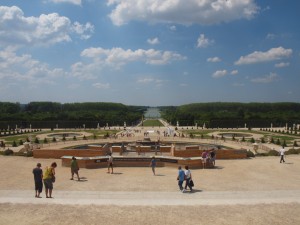 And so grabbed a free map and went to the gardens. Also here… impressive huge. I don’t even know if huge is the right word. Gardens, flowers, trees, lakes, fountain, statues… as far as you can see. The last lake is so huge that you can drive on it with a rowing boat. And of course a lot of people.
We had a look around on the right side first and decided that the bright side is not always the best choice. Sometimes is it better to walk on the shadow side. 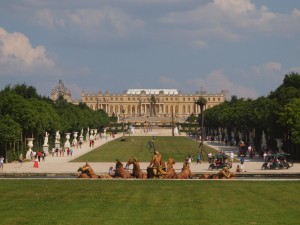 So we went at the next best chance to the left side of the way. It was by chance a fountain. We stopped here some minutes and relaxed a bit. Then we walked further to the big pond. Here was a meadow in front of it. Some people was lying on it and we did the same. We relaxed, watched other people and I made some pictures (of the garden!).

After that great break we continued our excursion through the park. It’s approx 3,5km long, according to the map. But we went through gardens back in direction to the castle. We reached it after approx one hour and sad down close to the ticket office on a bench. Here is supposed to be free wifi… but we couldn’t find it. Instead we made a break and had a chat with 3 girls from Germany, which just made a holiday week in France. After our break we went back to the car.
A small visit in the city center and we found a bakery for a Baguette and a small supermarket for some other shopping. It was already half past 8 and all other shops was closed already.

Back at the car we made a very yummy dinner with original French Baguette. Interesting and tasty.
And of course there can’t be a Mc Donalds visit be missing in the evening. We had one just around the corner. I wanted to make a research for the address of the café, from the movie Amelie, in Paris. I need to see it, when I am already there. And also I needed to check my emails.

Around half past 12 we converted finally the car and hopefully nobody will bother us in the night. In the evening was a breakdown car came on the parking and a guy was running around to inform everybody who was at his car this time that tomorrow all cars have to be gone. The Tour de France will pass by the day after tomorrow and the parking must be empty at this time. But we will be (unfortunately) not here anymore at this time. Tomorrow we will drive straight to Paris in the morning. I hope we will get out of the bed early this time.