today I have something new to tell :) I was my very first time diving.

I’ve decided a few days ago that I need to do something… during the week I am basically just at home. During the day working and in the evening I am not in the mood anymore to go out or I have my own customer for which I need to work. Saturday is mostly just shopping and from time to time a small journey. Ok, on Sunday I go often out with Cindy… but real movement isn’t there. So, I needed a hobby :)
I am living now on an island in the Mediterranean sea, so the idea to go diving is close. And I am curious and like to see new things. So it is a good chance to see and discover a “new world”. 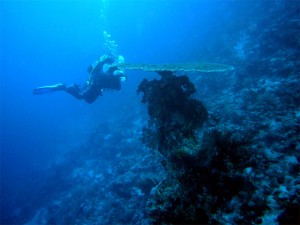 The decision was made… the next step… to find a good dive base. But it is the same problem like always when you try to find something “good”… a good doctor, a good bank, a good partner… it is not possible to know who is good and who is not good, because you can also just look in front of their head. I need to try.
I was choosing at the end Aloha Divers and was there last week for a first chat. We was talking a bit and I was also asking about the prices. And we made an appointment for today… for a “try dive”. I never done it and maybe I will hate it… :)

I was the whole week reading on webpages about diving. My English is not the best and the people in the dive school speak only English. I wanted to learn a bit about it before and also wanted to see what other people write about it. I found some webpages which describe the basics about diving (hand signs, technique and so). On many pages I found also negative things… dive accidents and things which can happen… that made me nervous. 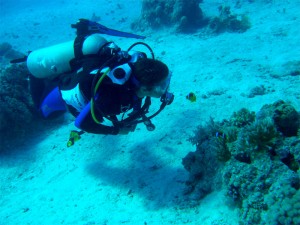 And today was the big day finally. I was more afraid as that I was looking forward to it… :( But I went there anyway. Was 20 minutes to early there… but the both instructor also just arrived… good timing. :) Then I had to watch first of all a nice DVD with the first instructions. In English… but most of it I’ve known already from the webpages and could figure out what they mean, even I understood just pieces of the DVD.
Then I god dressed up. Very tight the suit… but makes slimmer :D … putting on weights, trying the mask, boots (he said I have the smallest feet he ever saw as men :( ) and then the jacket and cylinder. It’s not that heavy as I expected. And I almost forgot the fins :) And then we walked to the beach. Full equipped around 50 meter through the pampa… I felt like an astronaut. :)

When we arrived at the water, we dressed the fins… not that easy when you are until the knees in the water and the tank on the back. But Phil helped me.
Mask on and then further in the water, until it’s up to the throat… in the moon walk (backwards)… it’s easier with fins. ;) And then it became serious. First he was showing me how the regulator works, then we replied the hand signs and how to use the mask properly… and then we went down… 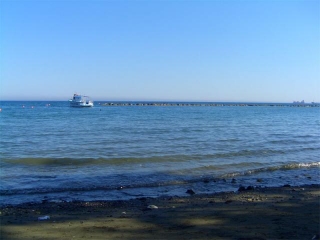 The first breaths are really unaccustomed and I just wanted to go up again and breath “normal”. Very very strange feeling… At once you’re in a different world. It is hard to explain when you never done it by yourself.
We started to slip through some basics… taking the regulator out of the mouth and back (under water of course), blowing out the mask, what to do if the air of your buddy is finished… etc.
I was, I believe, most busy to concentrate on my breathing and to get rid of this strange feeling. :D
And then we was diving a small round… as I said, it is hard to describe to someone who haven’t done it… but from this moment it was really great. Good, we had just a depth of 2-3 meter. But it is amazing when you don’t have to get up to breath.
20 meter in front of the beach are the break water and after still 10 meter swimming area, with buoy at the end. That was our target. A break water under water looks really… impressive. Here we met also the first fish. … An experienced diver will maybe laugh about some crummy break water… for it was exciting. The depth was there around 3 meter. But then I couldn’t equalize in the left ear… :( Even after several tries it wasn’t possible and we had to go back :(
We swam back to the shore on the back (on the water).

We was drinking then at least one more hour coffee (or they black tea with milk …. English people :) ).
Phil is very nice, always helped and took care and I felt really good with him as instructor.
At the end I registered for the first course (Open Water Diver) and will definitely do more. This small overview was enough for me to know that I want more of it :)

So, most probably I will write soon more about my diving adventures :D Stay tuned!

PS: From no I am writing about my diving here: http://www.diveshirtshop.com

(Pictures: No, they are not from me… top: joakant, down: coxwain 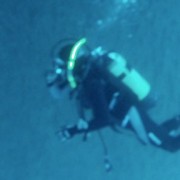