Blog - Latest News
You are here: Home1 / Private2 / I was shooting…

Soo… today I can finally write some news :) I was shooting today, for the first time in my life with a real shotgun. :-)

My both Ukrainians always do something on the weekends. Last week they where riding Quad-bikes in Akamas. There I couldn’t join unfortunately, because of lack of money. This weekend they decided to go shooting. So I grabbed some Euro and went with them. Always wanted to do it and who knows for what is it good. :)

So we checked the possibilities to go shooting here. And there is an International shooting club not far from here. They have all we need. Guns, ammunition and targets (clay pigeons). The prices are also ok. Can’t remember the exact prices. But at the end we payed 160 Euro all together. For one shotgun, 300 bullets and a lot of clay pigeons.

But first of all we had to go there. The guys had no plan … and I was weak-kneed. First of all I had now idea how strong the recoil would be and how it would feel like… and on the other side to shoot someone by accident. Friendly fire quasi.

But we had a Aussie with us, who said that he was hunting already several times and have his own shotgun at home. He provided us with the first information and handy tips. Never point the weapon on people, loaded or not (good tip). Load the weapon just before you shoot. If the weapon is not in use, then keep it open. Point a loaded weapon always on the target or on the floor. Finger only on the trigger when you point on your target. If someone is approaching you, don’t turn around. Open the gun immediately after she shoot and keep it open.

That helped already a bit to calm down. But then he explained what damage such shotgun can create… foot gone, whole in the leg, etc. There it was again… the tension… :-o 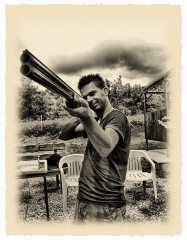 As we arrived at the shooting range we got what we needed. One shotgun, 100 bullets (25 each) and credits for the clay pigeons. And then we started. We got area no. 4 … where is that? A guy explained us and we were walking in the told direction. Once around the range… no 4. Back again… asking again… new try and after half an hour walking (the ammunition can become very heavy) we found finally area no. 4… the last area on the place… behind the hill. I guess they were afraid that we hit more then just the clay pigeons. :)

And then we started. Sascha, the Australian guy, was shooting first. Looked easy. Then Chester. Sascha explained him how to stay … and then *peng*. Looked also easy. Couldn’t see any recoil. Ok, easy.
Then Ira, the little graceful lady in our group. If there is any recoil, then it should be visible when she is shooting. But Ira had a different problem. The Shotgun was much to large for her. She had to reach out the left arm totally to hold the weapon… and then… *peng*. She had recoil… but was still ok.

And then I took the gun and did it :-) It wasn’t that bad at all, as in my imagination. Ok, you can feel it for sure. But not that hard that it knocks you down. But the clay pigeons was a bit to hard for us beginner. We were searching for cans and bottles instead. That was better already :-) Not moving targets… and we had the first hits.

And after the first 100 bullets we realized that they gave us the light ammunition.
We were so excited about it that we went back and took straight 200 more bullets… with more vigor. :-) And also another shooting range.

The new ammunition had more power. Which doesn’t mean that we hat more hits. :-) But our kangaroo hunter even lost. With the new ammunition we were only shooting on clay pigeons and was counting them. Inclusive all chance hits Chester had 15 hits (in the last round he shot straight 4), I had 13 and the Sascha 8 :-) From 200 bullets. Each 60, because Ira couldn’t continue anymore. The position in which she had to shoot was to bad and her shoulder was hurting soon.It was an interesting experience. Now I know how it feels to shoot with a shotgun.

And because there were straight critique… here again… I am not planing to shoot on living objects. Either humans nor cats or kangaroos or anything else. Except I am starving and need food… but not for fun.

It is good to know how it feels like and that I can hit something… who knows for what it good is. 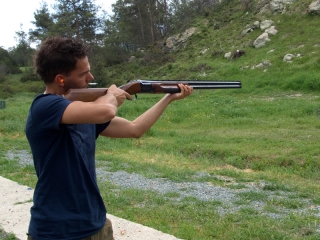 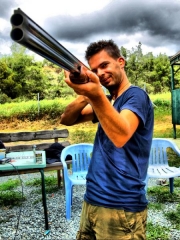 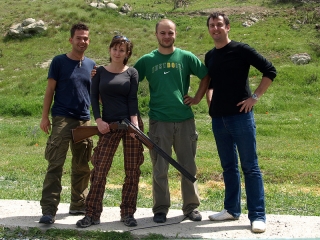 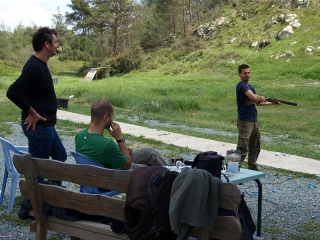 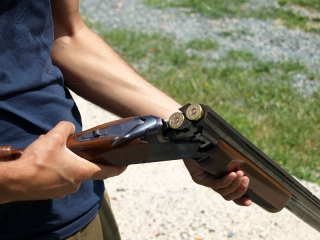 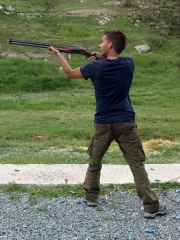 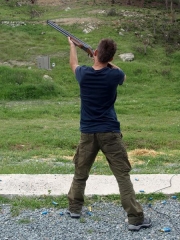 My first podcast – Swimming in the morning in the sea and in the afternoon...