Blog - Latest News
You are here: Home / Other / Living keychains from China

A post in Facebook just got my attention. First I thought it is again some shit. But there was small turtles on the picture and I had to click on at. What I had to read then is the next madness from far east. 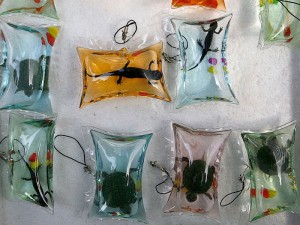 To see is a picture with keychains. These contain a small transparent plastic bag in which is a liquid in which is a small animal. Fish, turtles or an amphibian. The bizarre thing is… the animals are still alive!

This is so unbelievable that I almost can’t find words for it. They mention in the report that the liquid contains nutrients. These let the animals survive for 2 month… before they finally die of starvation. I think with they reached a new extreme form of animal cruelty. To cage an animal in a small plastic bag and to keep it alive for a while. And when the time is over they starve and is dying in pain… but finally.

I know already several stories about far east. But if they grill or fry grasshoppers (or whatever) to eat them then… ok, shall they do. Eat what you kill. Und who likes grasshopper (or whatever)… my god. Shall they do. (I would also try when I am there.)
But to kill animals to throw them away is disgusting. And when people agonize animals to dead… then is it without words abnormal.

And the one who is buying then these poor animals (for around 1 Euro) should be also caged in a bag and welded in. Because where is no demand (market) there is no supply or it disappear again. But I bet there are a lot of people who think it is totally fancy to have a little moving turtle or a swimming fish on the key.

There is already a petition against these animal cruelty. If you like you can sign the petition on the following page and you can help to bring it to an end: http://www.change.org/petitions/stop-living-creatures-being-sold-as-keyrings

Here are 2 videos on Youtube about these pervert keychains.

And when we are already in the subject. While browsing trough Youtube I found straight some other pervert thing. I it really sick what people are able to do.
Someone found in a fish shop (somewhere) a turtle. The shell was cut open on the back, so that the “customer” could see the innards. And the animal was still alive!!!
The animal suffered for at least one hour, if not longer! That’s real cruelty!