I can’t follow with writing at the moment :( That’s why today just quick about the dive last sunday.

I could completed my equipment due to an lucky coincidence. Now I have everything and am free :) Now I can go diving whenever I want :)
But I shall not go alone. That’s why I am bound to my buddy (mostly at least).

Through another coincidence I’ve met another diver who know the location of the wreck in Akrotiri. We are looking for it in the last days on the maps of Google Earth. Looked like nobody knows where it is.
There is one direct on the shore. But it is to shallow to dive there. But there is another one in a depth of 7 meter. The people in the dive shop said that the other one is a part from the one on the beach and the location is also there. I was about to go there and just jump in the water and to search for it. Good that I haven’t done it. The other wreck is more then a kilometer more south. On that spot I would have searched for ages and would have found nothing.

There is also a big confusion between both wrecks. Some say both are actually the same (based on the distance is it unlikely). Others interchange the names and anyway nobody knows anything. Luckily I found a very good webpage where a lot of wrecks are listed (http://www.wrecksite.eu). And on this website are both wrecks listed. I have my information now from there and hope that this information are at least correct (even I am not sure about the story, but more about it more down).

Luckily I’ve met these diver and he know where it is. He offered me and Alice straight to go there diving on Sunday. We couldn’t say No. :) Also my buddy Ira had time and came with us (which makes me always happy when my Buddy is diving with me… we are the best team!).

An so we started on Sunday morning. Half past 9 was meeting at the dive shop. We packed everything in the car and collected Ira in Kolossi.
The way to the wreck leads across nowhere. Only field roads. Good that Grzegorz is driving a big car. Some when we reached the small fishing harbor somewhere on the west coast of the Akrotiri peninsula.
It was already busy here. A few fishermen and other people with small zodiacs.

The wreck is visible from the beach. It sticks a bit out of the water, cause it lies in just 6-7 meter depth. Indeed there is a way of around 500 meter to swim until the wreck. We decided to snorkel to the wreck and descended just 50 meter in front of the wreck. 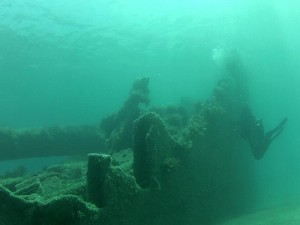 Even at this shallow depth is it amazing when you reach it.
The official story about the wreck of the SS Three Stars, which I found in the internet, is that it caught fire and burned out in the Episkopi bay and finally run aground there.
But when I see the wreck in front of me, then it looked more like it got bombed. The vessel is literally shredded and is lying there in pieces. The visceral are lying there everywhere around. The walls are partly ripped. Partly I can’t recognize which part belonged to where.
That was definitely not just a fire. Maybe it became, after it was declared as a total loss, a training target for the army. Who knows. The true and complete stories are always hard to find.
Just have a look below on the video. Then you’ll see what I mean.

Our dive time was (without snorkeling to the wreck and back to the beach) exactly 60 minutes. I was with my 18 liter cylinder (yes, I have such big baby now :) ) st the start. My start pressure was 180 bar and at the end I had 100 bar left. The water temperature was nice 24 degrees and the visibility was around 10 meter. The visibility was not so good. Not good for making movies. The ground is a mix of sand and mud, which made the visibility quick bad, if you don’t care.

Otherwise was the dive very easy and I am really thinking to go again there to make a better movie :) Maybe a small documentary about it :) Will see.