today I have again bad news.

After we’ve heard about the disaster of Vera K., we’ve started the search on last Sunday. Our information was that she got lost somewhere near a beach close to Paphos. We had as well (unverified) GPS coordinates.

An so we went all together to Paphos. Ira, Chester, Michael, Alice and me. Armed with snorkeling equipment. Bevore we went I’ve checked in Google Earth the coordinates to see where approx. it is. It is a beach next to the last hotel in Paphos. Close to the water park.
On the way we picked up Alex as well.

Some when around 3pm. we reached the beach. It was unexpected full. Actually it was packed. Almost like the Nisi beach in Ayia Napa. I got straight the clue that it wouldn’t be an easy search, with all the people around. :( Even more worse was all the kayaks and jet ski.

And the crown of all is that they are just building break water there. Ok, they don’t work on Sundays. But due to their works is the visibility under water really bad. The visibility close to the shore was just centimeters. Behind the break water was it better… around 20 Meter.

The expected position of Vera K. was around 200 Meter in front of the beach. Outside of the swimming area. We was looking for a buoy, which could mark for their position. There was several buoys. 2 bigger more far and a few closer to the swimming area. 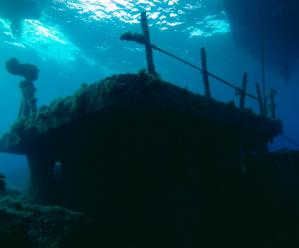 But unfortunately we had to cancel our search, because it was too dangerous with the jet skis around. Even in the swimmer area was this idiots driving. One crossed my way just a few meter, to pick up a friend from the beach. The rescue guy (itself on a jet ski) recognized it and drove to the guy. He missed me even more close.
Also during free diving I almost collided with 2 kayaker, which appeared from nowhere.

We will have no other chance to search for Vera K. with a boat. She must be there somewhere in a depth of 12 meter and wait for us :) Just the search with a boat is again more expensive, and money is scarce at the moment. :(
Will see what will follow the next days and weeks. The hope dies last.

Anyway it was a nice Sunday. Doing nothing and exploring some now place.