Blog - Latest News
You are here: Home / Private / Dear cold, I declare the war on you!

I have now a few days already a stupid cold. First it was just my nose, then also coughing and now it hurts also everywhere.

I think it becomes to much now. So I decided today to declare the war. :)

Actually I have a very good immune system. It is not very often that I become sick. Maybe once all 2 years (or like that) I get get a cold. And this year is the year again. And it never comes to the right time. So also this time because the next weekend shall be a special weekend. And this cold/flue doesn’t fit at all in it.

As I said is my immune system usually very good. I also don’t take any tablets, if I don’t have to. All this chemicals can’t be good, if there is no really serious infection or something like that. But for a cold… not, not really.

It didn’t become better in the last 2 days… it even became worse. So today I declared the war on the bacterias! :) 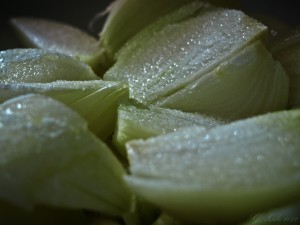 A home remedy which I still remember from my childhood and which was always helping. It is great against coughing (mucolytic)  and in general good against cold.

It is 100% natural and very simple to produce. Just peel some onions (2-3) and cut them (not to small pieces). Put them in a bowl and add good sugar on top. Then cover the bowl and leave it for a while. For the first time is it the best over night. On the next morning should be enough juice in the bowl for a first “harvest”. And then every few hours again, when there is enough juice in the bowl for a few spoons.

And against the opinion of all people which never tried it, it tastes really nice. Like sweet sirup. And also children like it. 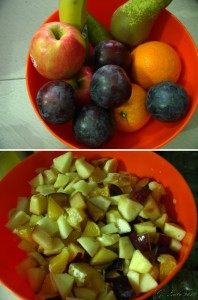 First of all visit your favorite supermarket. Then grab from everything you like (fruits!!…) the best quantity… like for example 1 apple, 1 pear, 2 bananas, 3 plums, some strawberries, etc.

Then peel everything, cut them in cubes and put everything in a bowl. At the end stir everything well and… that’s it. You can modify it as you wish of course.

And then take the bowl with you to the TV in the evening or to a hot bath :) As you like.

And for the worst-case scenario I got also Nurofen cold & flue from the pharmacy. I’ll take one tonight… just in case. And from my friend I got Vick Medinight. Which I will use as well tonight. … So I should be well like never before tomorrow :D I hope… will see :)

All the best (and lot of health)

Get an internet connection in Cyprus