I’ve mentioned it last time already. Beside of the macro and splish splash photography, I also try now the water drop photography.

As I mentioned last time already, it’s actually just possible with high-tech. At least if you want to create really stunning structures. But of course there are also some simple things for beginner. At least if the beginner isn’t fool or at least able to use Google ;)

Drop pictures are – as the name is saying already – pictures of drops. :) Why to make pictures of drops? Well, because drops can create cool shapes, in the moment it hits something. Also here is the saying of many photographers – to freeze a moment – very true. Because this moment – when the drop is creating this amazing shapes – is just a flash. Not even clear visible for the human eye. (Have a look in the video below.)

Ok, how to do it now?
As I just said, it’s about a drop (water, milk, color… whatever). So, there has to be a drop. Professionals create the drops computerized and with magnet valves. But this can cost some xx-xxx Euros (except you are ambitious DIY’er). 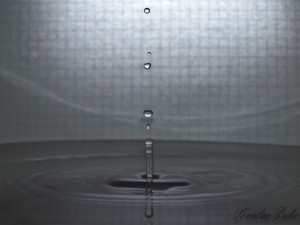 But it is also cheaper possible. Beginner like the infusion sets. This things which they use in the hospital. Yes, this things which dropping. … Drop ;) It’s a very simple, but functional system. A small tube is connected to a bottle with liquid and the liquid is running trough the tube. But it needs to drop… that makes a regulator. So you can adjust the drop frequency.
It cost me today not even 1 Euro in the pharmacy.

But then the question… to what do I connect this infusion set? I didn’t had anything… so I just put the end in a pot of water. This on top of a chair – on a desk … keyword: gravity.
Then I fixed the other end a bit lower on the chair (half height). The drop still needs a height to fall. As higher as more powerful the impact. And the rest is easy.
Plate or flat bowl underneath (water level should be around 3 cm). The camera on a tripod. Focusing before the point where the drop will hit the water and then the focus on ‘manual’, that the auto focus will not distort the focus point.

The most important part at drop photography is the flash. Because it’s the flash which will freeze the drop and it’s form. That’s why the flash needs to be set on the fastest burning time (my Yongnuo YN560 II can max. 1/128).
And then you need tact and playing around. The drop is falling and in the right moment you need to push the shutter.

It seems like the best place for the flash is behind the scene. On the other side of the plate (or whatever you use). But I have a space problem here… so I was playing around.
The internal flash I just need to remote control the slave flashes.
And my Godox CF-18 died at the session today :( Of course the seller is in Hong Kong… damn. But it seems like the Yongnuo is a work animal… the Metz died, the Godox died… the Yongnuo is still alive… and my last external flash at the moment :o

The good thing on slave flashes is, that they are not connected to the camera. They can be everywhere around. Which is here good because – as I said – the flash should be on the other side. So flashing from behind the scene.

But I anyway got some good results for the first try, as I think. You can see some of the results below.
I will play more in the next days with it. Will also try some colors and mild and such stuff. Will be funny :) and also a mess. But the pictures are cool, isn’t it? :) I think about to print some :)

Here the video of the setting: