I wrote yesterday already about the current situation in Cyprus about the expropriation of the private finances. There is not much new yet. At least nothing concrete. As far as I was reading yet, there is no decision made in the parliament yet. The president tries to renegotiate.

But I just saw something else on Facebook. The pictures beside and below have been posted in a group in Facebook (just a small selection of the last 10 hours). And the pictures have been shared and liked a lot. As comment you can read hate slogans about Germany.

And honestly… it makes me sick. Doesn’t matter what happen in the EU… it’s the fault of Germany. And Angela Merkel is the bogeyman no. 1 (because federal chancellor of Germany). 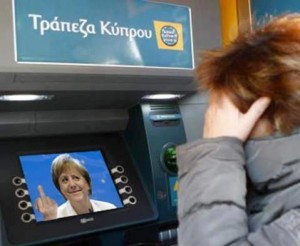 Angela Merkel is showing a woman the middle finger, while she is trying to get money from the ATM

But to our current story… if the people, which created this pictures,that the decision for this compulsory charge is made by the finance minister of the EU and not from Angela Merkel or Germany. I doubt it.

And this is just the current example. I saw this kind of pictures already in the time when Greece got 80 Billion Euro from the EU(!). Till now is Germany the most hated country… in the countries which got aid payments. 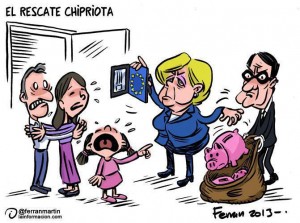 I am really not a big patriot (if you’ll get this thought now). Bit what enough is, is enough.

If these people know that Germany is the country which is paying the highest percentage of the EU bailout fund? Germany pays 29,07% of the money in the big pot and is no. 1, straight after is France with 21,83% and no 3 is Italy with 19,18%. 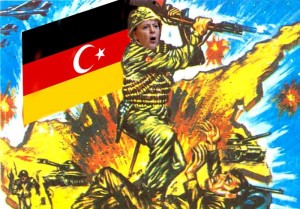 Here is Germany now part of the Cyprus conflict. Now is also our fault.

Which means that the German citizen are paying 392,40 Billion Euro to help other countries… and they are hated for that. I was wondering already, back the time when in Greece the fight with hate paroles against Germany started, why Germany wasn’t showing the middle finger and then bringing the money back in the own country. If help gets hate as reply… sorry, but every normal human would have been canceled the friendship already. 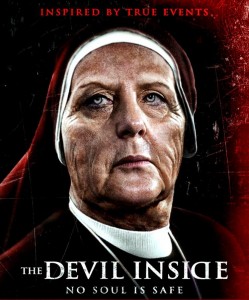 And why it is now especially Germany… and not France or Italy or any other country… or maybe finally the ones which really make the decisions and the restriction: The EU … that knows probably nobody anymore.

The people just know one thing… When the shit hits the fan… then it’s Germany and Angela Merkels fault… for sure… without questioning.

Lets make quick some hate pictures and paroles and spread them in the world… enough people will like and share this bullshit and my page will become famous.

So… that needed to be said.

On that note
Gordon