I came just back from my long Germany trip and don’t know at the moment what to do first. Editing pictures, writing the report, working, enjoying the sun, going for a dive. Terrible.
But it’s weekend, so I was editing the pictures at first now and uploaded them in my facebook account. Now I’ll write the 2 articles (that will take time ^^) and then working… accord. The rest has to wait, I think :(

But you don’t read this article to listen to that. I guess you are reading this article because of the headline. ;)
I wasn’t telling about this plan before, but I found a few month ago an ad in a globetrotter forum. A young lady was looking for someone who would like to travel with her in a micro camper for 6 weeks through Europe. A road-trip.

I was straight interested. Even I am not living in Germany anymore, and even on an island in the Mediterranean sea… which doesn’t mean that I see a lot. Nothing to be honest. The only flights I have is to Germany and back. But that wasn’t my plan. Actually I always wanted to travel more… but it never happened.

And when I was reading this ad, I got straight the thought “But now!”. She was describing her idea very detailed… what she want and what she imagine. She had a plan and I liked it. :) And Micro camper… well, I am anyway very minimalistic. That wasn’t a problem for me. But she didn’t had a plan for the routing yet… so, it was still open and we could plan it together.
So, I was writing her and got even a reply… a few weeks later. We started to write in Skype and to get known to each other (the distance isn’t that helpful… but luckily we have internet). And so we Skyped a while… and it seems like that she is a nice woman, which which I could live for a while (not to forget… 6 weeks all the time in a micro camper… that must fit).
And it seemed like that I am also likeable for her.

After a few weeks she told me that she made a decision… for me :) What can I say… I loved it! :) So, it was fix… we would travel together.
We decided to go west. Even we would both like to see the east as well… but it’s not that safe in the east and west Europe is more warm ;) Maybe we can travel to the east some when later.

Understandably she was asking for a personal meeting. Which I also preferred. Only in real life you really can figure out if you like someone or not. And also the car needed some attention. It is good when both lend a hand on it.
So, I decided to combine a round trip in Germany… customer, a visit at her and a visit at home. That’s why I was the whole April in Germany on tour. First one week at the customer, then a week with her and home. (Report will follow… some when :) ).

And so I met Julia at the beginning of April personally… and the Renault Kangoo… which will bring us hopefully good through Europe.
Julia is a very interesting person (yeah, don’t think something wrong here… she is happily taken! ;) ) and I think we will survive this 6 weeks. :) 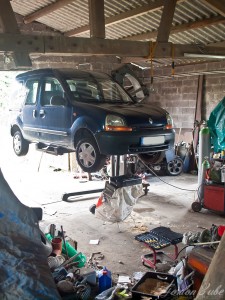 In was talking a lot, was getting known to each other, was working on the car – building a bed, changing the exhaust pipe (I did it! :D), changing oil, added a coupling device, etc. – in the 9 days. And we even was 2 days on a globetrotter meeting, which was close, by chance.
So, I think we’ll manage all right. And I can’t wait to start the trip :)

As route we was choosing – as I said already – the west. There is still no detailed plan yet. But the rough plan is: Start in the last May week. Then first going down via Bavaria to Italy. Julia wants to make there her paragliding course. After a few days to Venice. And then south-France, south-Spain till Gibraltar. Then further to Portugal… on the coast up to the north… north-Spain and back east. North-France and some when turning more east… back to Germany via Paris.
The distance will be around 7000km – in 6 weeks. I think it will turn out a bit tight with the time… but we will see. She can’t go longer and I think the same for me – financial. :( Pity. I guess at the end of the trip I’ll not leave the car… just going on… further :) We will see.

Anyway, in my imagination it will be a great trip. In the car and just drive on. Finally exploring something from the world… well, at least Europe for now. Leaving all worries home… for sure fighting with new ones… but at least different ones. Taking a break from everyday life, exploring, discovering, photographing… doing as it pleases. Hmm…. :)

Of course we are also working on a plan how to get internet on the way. I want to keep writing (and even more on the trip)… to keep you updated. ;) Writing some words in my blog every evening… maybe even with some pictures.
Unfortunately there is no option to get a card for whole Europe. And roaming is expensive. The cheapest provider I could find is a German discounter. His offer is 7 days, 60MB for 5 Euro. But 60 MB is not much for emails, blogging, uploading some pictures and most important: searching for places of interest around.
But couldn’t find any better solution yet.
That is really something what the provider need to do.

Anyway. I was adding a new category in my blog (“Traveling” – “Road Trip West Europe 2013”). Here you’ll find from next month the travel reports ;) Stay tuned. You can also register for my newsletter, then you’ll get always a mail when I publish a report. So, you don’t need to come across every day and you will not miss anything ;)