I didn’t had so much time to write in the last days, as I promised. Now I have just a few minutes time to write some lines about the first/last days :) It was stress, it was hard, it was worse and absolutely not as I expected or planed it.

But one by one. As I wrote last time already, I found someone with whom I was planing a road trip through west Europe. (Our home will be the whole time – more or less – the car)
The start date was planed on the Friday, 24th of May 2013… Julia (my travel buddy) had an appointment on Friday in Switzerland already. So, we had to arrive in Switzerland on Friday.

The best fly would have been on Thursday with Condor. I’ve checked the flights before already – when I remember correct – was the price that time around 150 Euro. Not optimal, but could be worse. Like that I could work at home till the last moment, to earn a few more euros.
Unfortunately I was waiting to long and the price went up to 230 Euro. Which was not acceptable anymore for me. I had to switch to the Monday flight. Now I had to leave earlier and could work less. But Julia said it is no problem, I could work there. … Well, my netbook was anyway with me, that I could store my pictures on the way and to blog a bit and so on. Now I had a new plan. Another advantage of this plan was that I could visit, on Tuesday, a customer in Germany as well. Then Wednesday and Thursday working and Friday packing the car and go! Good plan!

Chester drove me to the airport and I was on the way. I arrived around 11 pm. in Germany and Oliver drove me to the same Hotel like always when I am there. Tuesday then a training and a bit other work at the customer. And he took me after the work also to Aachen, to Julia. Very nice… no stress for me.Julia itself wasn’t there that time. Luckily her boyfriend was. So I didn’t had to wait in the rain. She came a few minutes later.

We was talking a few minutes and went to bed soon.

The next day she had to visit the garage with the car. I made some strange noises… and we didn’t wanted to drive 8000km with a car which makes strange noises. Then the surprise… the guys found more then expected. The brake cable, manifold and several other things needed to be replaced. A few hundred Euros left the travel wallet. :( I was working in the meantime at home. 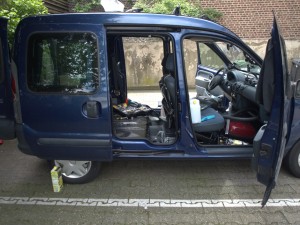 Then the next jar… the car wasn’t ready… and I was sure that we can’t finish it in the 1-2 days, plus I had planed both days full with my work. The solar panel had to be installed (as second electricity supply) – half of the car had to be taken apart, the reversing camera had to be installed, the ‘kitchen’ had to be rebuild, lamps had to be installed, moped holder had to be build, curtains had to be made, the water supply wasn’t installed yet and some other small stuff had to be done. Enough work for weeks.
And now we should finish it in 1-2 days… We was building the whole Thursday and Friday (incl. half nights) on it. Of course we didn’t finished it on Friday and rescheduled the start to Saturday. A few things was ready on Saturday morning 2 am. I should drive on Saturday, so I went to bed that time. Julia wasn’t sleeping the whole night. At 8 I wanted to get up again, to drink a coffee, taking a shower and packing the car with our stuff. I was up at 8, drank my coffee, took the shower and packed my stuff. I was – almost – ready in time.

But we managed to get on the street first 2pm. … then was finally everything in the car. In the meantime I was so angry the I liked to unpack everything again and would liked to fly back and cancel everything. That was not was I expected. Just stress … and the start was more and more delayed… that I didn’t believed at the end that we will ever start.But it happened. Saturday at 2pm we finally left her home. First for a quick stop in the city of Aachen and then finally on the highway in direction to Switzerland.

I was tired already again. Not enough (and good) sleep in the last nights. But it was ok. A few Red Bull and some small breaks and I managed it to drive whole way to Switzerland. We arrived there around 10pm.

The wanderlust also came back partly… even the whole things in the last days (with all the struggling) destroyed it a lot. But I hope it will be forgotten soon and I can enjoy the trip… and there will be no new struggles.

So, I will get soon now in my bed and hope I can sleep well and long the night. Will see how the day tomorrow will be. I hope good :)

PS: Julia is living here in the middle of Aachen. Behind the house is the parking space of the house. And behind it is the plot of the next house. They have a small garden in front and a little house. In the garden are 3-4 bigger trees and it seems like the owner like birds and animals in general. Everywhere in the garden are feeding places. Everywhere in the garden can you see different kinds of birds.. which fly around and talking … just wonderful. I was standing often there for some time and just watched the scene. One time even a squirrel came across. Brilliant! Of course I made pictures ;)

PSS: The writing take me hours. Really hours. I need to reduce the time consumption of it. So, I think I will write from now on just quick and dirty. And maybe I’ll find the time to write a proper article when I am back. Also with good pictures.
To edit pictures on the netbook takes hours. Not possible. :(