it goes on. :) And again we slept to long. We wanted to go today to Munich, to visit the German Museum. But I ignored successful my alarm clock again. So, we started around 10am. Then on the highway in direction to Munich. It was around one hour driving. The weather was – of course – shit already. It was raining like hell. :(

First of all we had to go to a special post office. Julia had to pick up a parcel from this post office, which was send there until her call. Of course I was adding a wrong address to the navigation system. We ended up in the wrong area of Munich. Luckily it was not far to the correct address. It was a time loss of half an hour.
Then we found finally the right post office. In the middle of the city. No parking. But it can’t take long in a post office – was my thought – and I just stopped opposite of the office, in a driveway. Of course… it took longer then a few moments. The post officers couldn’t find the parcels. It took them half an hour – plus Julias help – to find them. 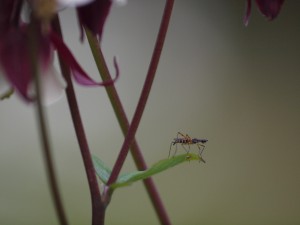 The German Museum was almost just around the corner. And again searching for a parking space. I decided to go in a car park. It’s easier and less stressful. But more expensive. 7 Euro per hour (max. 20 Euro). Really expensive. But it’s Munich city.
The exit of the car park was just next to a Globetrotter shop. Of course we needed to have a look inside. Julia wanted to have a look for shoes and I was looking for one of this great towels (very thin, feels like leather… but dries very good). So we went in the shop. 4 floors… probably the biggest Globetrotter store in Germany. In the basement the people can even try canoes. ^^

After ages later we left the store. No shoes, but I found a towel, a map of Europe and lashing straps.
After we left, we went quick to the next cash machine. I was out of money again. The third time I took 200 Euro from my account. Slowly it becomes expensive… but there was till now a lot of stuff which was not planed in the travel budget, like the solar system. And then we went finally in direction to the museum.

Finally we reached around 2pm. the museum. It was full, for such shit weather. We payed our 8,50 Euro entrance fee and realized that the museum will close at 5pm already again. So we had 3 hours for this huge museum. It’s not much, but well… what we will see, we will see… and the rest unfortunately not.
First of all we came in the shipping area. Old vessels, new vessels… original ones and replications. For me was the U1 (submarine) the most interesting part of this exhibition. It was in the basement and sliced, so that you can see everything inside. That was very interesting. To see the first submarine.
Then we reached the electronic section. So, generators and high voltage devices. And every 3 hours they make a high voltage simulation. We came back for the next show. Really interesting and very loud. I made a movie, but can’t show it. As well the pictures. It is not allowed to show any video or pictures from inside the museum. Totally dumb… but what can I do. :(

We had around one hour left, after the show. We decided to go separated ways. To see more what is interesting for us. I decided to have a look in the IT section. But it was boring. Sure was it interesting to see this old technique and how it works before (I mean before the computer came in every single house). But when I passed by the air section of the museum… in the last 5 minutes, on my way out … I know that this would have been much more interesting. Well… it was to late. I had a quick look through and then had to go out.

Julia was waiting already outside… or better in the souvenir shop, direct in front of the postcards. Postcards… good idea. I also needed some. I took 3 nice ones from Munich. I always take 3. 1 is always going to Lotta :) and the other both always to 2 different people.

After we went back to the car. But first to Globetrotter again. :) I found a knife and a tool for the way (each for just 10 Euro) and 2 books about traveling. Something to read on the way :)

Then we payed our 15 Euro parking ticket and back on the street in direction to Castle Neuschwanenstein. Not much further Julia realized that we forgot the mountings for the solar panel on the roof in Augsburg. We took the panel off in Augsburg, but didn’t put it back on the place… and now was the mounting still in Augsburg. We had to go back. :(
Around 8 we was back in Augsburg. Christine was out and we went in the city to have a lunch. Then we went to her home, took the mountings and got straight a few more tips from her, for the next days.

And straight back on the street, from Augsburg on the B17 down in direction to Schloss Neuschwanenstein. Christine told us a parking place on the street, where we could sleep over night. We found a place (maybe the one she told us, maybe another) und sleept there. 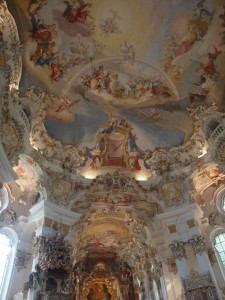 I don’t talk about sleeping late anymore. We got up around 10, packed everything and went straight to the castle. On the way we remembered that we wanted to visit the church ‘Wieskirche’. Christine said that the church is beautiful. So, we had to visit it. Luckily we didn’t passed the point where we had to turn to the church. I told Inge (our Navigation System) that we want to make a stop at the church and she told us where to go :)
The church is hidden somewhere in the nowhere.Looks like she is also a very popular pilgrimage destination. And it was not a lie, inside like outside is the church very beautiful. Mural art inside and outside.

Today there just arrived pilgrims. They walked partly over 100 km to this church. Well…

We checked the souvenir stands quickly and left the place again. Heading forward to our main target of the day, castle Neuschwanenstein. It is just a few minutes away (by car). We saw a castle from far already, but we thought it is the second one. There are 2 in this place. It didn’t looked like the one from the postcards. Much more grey and smaller and the shape was different as well. But then we realized, it is Neuschwanenstein. Well, maybe it looked so grey because of the weather. 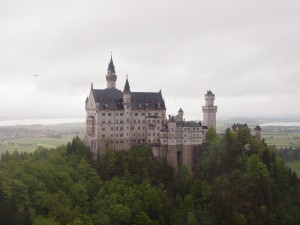 Anyway, the village was full of tourists. Almost no Germans, many Asians and people from Eastern Europe. We decided to have a look to the Marien-bridge anyway. From there shall be a great view on the castle. So, we packed our stuff (incl. umbrella) and started our walk… in the rain. After the way up, of 20 minutes, we reached the bridge. The view was really great. The weather was still shit, but it looked anyway great.
The castle is approx. 100 meter direct in front of the bridge, on the same height. The bridge itself is approx. 50 meter over the ground. It’s great to make good pictures. Much better pictures when there is no rain and sunshine… but we have to take what we get.

We went back to the car, without a visit of the castle itself. Julias shoes was totally wet already, it was cold and we needed to head forward. We wanted to reach Italy on the same day. Inge (our Navi) estimated 5 hours for the 350km way, via country roads, to avoid toll roads.

We was back on the road in direction to Bassano del Grappa. That was the final destination of the day.
It seems like Inge is calculating the arrival time by the highest speed you can drive on the roads. But in the Alps is it mostly hard to drive with 100km/h on a street. Partly it is still hard with 30km/h. Plus the cars in front of you, which are even more afraid and which drive just 20-30km/h. Our estimated arrival time delayed more and more.

Of course it was also raining the whole time. Car convoys was moving slowly over the mountain roads. I felt mostly said for the biker, in this weather conditions. And there was many on the road. 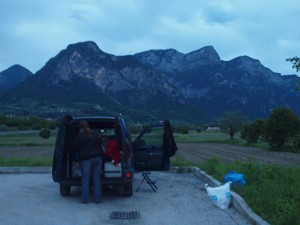 We left Germany and was crossing Austria till we reached Italy, via the Brenner road. Further and further trough the alps, always next to the highway, on the country road. The landscape, in the moments I risked a view, was very nice. Mostly I had to concentrate on the street. It was stressful to drive there. The rain, the curvy street and partly mountain pass. And then also watching the signs.
But we managed it. But not till Bassano del Grappa. This night we stopped, somewhere 70km before Bassano, on a petrol station. A few trucker was already there.
The place is in the middle of a valley. Also a great landscape. Of course something with a great view :)

I am looking forward what will be tomorrow.

Visiting Liechtenstein and storm in Germany.