as expected was the view in the morning great. :) Like every morning, till now, when we slept in the car.
The sun was already above the mountains and was shining in the valley. Anyway we was early this morning, as long sleeper. It was still before 9, when we left our bed. After a short washing, we packed our stuff and went back on the street. It wasn’t far anymore till Bassano del Grappa, our target. 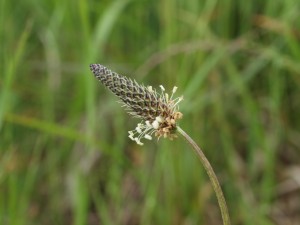 Inge (our navigation system) wasn’t in mood to work this morning. She wasn’t able to find satellites (I shouldn’t have said so many nice words to her). So I had to drive by signs. Luckily was Bassano already on it.
And the landscape was even more beautiful then the day before. The last end, before the Alps end, you drive through gorges… just amazing. If you ever drive from Austria to Italy… take the Brenner street, not the highway. It takes more time, but is much more beautiful.

A few kilometers later was Inge ready to work again and was leading us to Semonzo. A small town near Bassano del Grappa. This is the place where all the paraglider come to. Julia wanted to stay here for a few days, to see the place and the surrounding. She wanted to make a part of her paragliding course as well here, but unfortunately she didn’t managed to get all flights together, to make the course. So, she had to stay on the ground.

But she wanted to have a look anyway. So we went, after a small stop at the tourist information and a small supermarket, direct on the mountain. From 0 to a height of 900 meters in 15 curves. And this curves are nothing for softies :) Partly 180 degrees. I think that is even to much for biker to have fun. The Kangoo also didn’t liked the 3rd gear anymore. We drove up the hill with 30hm/h in the 2nd gear. Slowly slowly. :) 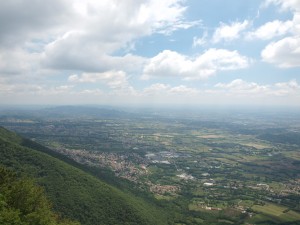 But the view up there made us forget everything. On half of the hill (the Mt. Grappa itself is around 1700 meter high) is a small restaurant with a bigger parking space. We stopped and enjoyed the view from there. I am sure you can see half of north Italy on a day with clear air. Today was it not soo clear, but still great. Even Venice is visible from here, and it is around 70km further.

Direct at the restaurant parking space is a ramp for hang-glider. The meadows for the paragliding was a bit more down and up the hill. On this mountain are several places for both sports. Seems like it is very popular for para- and hang-gliding.

The search for Julias people was a bit complicated. On the place where we was, they wasn’t. An other participant said that they are just down for lunch and they will come back later. So, we was waiting there and watched the other guys and enjoyed more the landscape. But as they wasn’t back at 3, we guessed that they are maybe on another place. So, we checked another place further up the hill, which is for beginner. And there they was. Julia started to chat with them and I used the time to make some pictures of the landscape and the nature.

We’ve decided to stay on the mountain over night. On the restaurant was a parking space and in the night is there nobody. So we went back to the parking. Julia was building again on the car and became mad from the short term rains in between. I wasn’t feeling very well that afternoon and I took a nap. My hayfever is here also back… great! :( After the nap I felt better again. 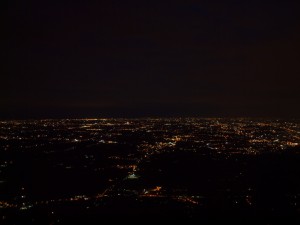 After the night came and it became dark on the mountain, we could enjoy again the view. But a different this time. Everything was dark up there and in front of us we could see a star sky on the ground, below us. The lights of the houses and streets look from up there like a second star sky. If you ever come to this place to camp. Go up on the mountain and sleep one night there. It is amazing.

After we went to bed. Early this day… around 10. But it was good to relax a bit.

Sleeping long was good :) I woke up sweating around 9. On the evening before the temperature went down to 13 degrees. But as soon as the sun was shining on the car it went up straight to 24 degrees in it. I guess I was never so quick out of my bed in the last days. Julia did got got disturbed by it so quickly.

But it was good, because a bit later the first pilots arrived and was parking next to us. The first morning chats started (Julia from the bed).
Then also hang-glider came this morning to fly. It was interesting also to see this kind. But it looks very complicated with all the stuff and building the glider.Paragliding is much easier. You just need your parashoot and the backpack and that’s it. But even there a beginner equipment cost around 3000 Euro. Also an expensive hobby. But I think it is fun anyway :) 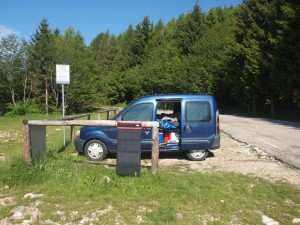 The rest of the day we was just relaxing. One day doing nothing. The restaurant was open from the noon and I had the chance to finally get a coffee… sorry, Cappuccino. And we got the WLAN key from the restaurant WIFI :) I need it to go online from time to time… for example to write here in my blog ;) or to check Couchsurfing or to check the weather forecast or to check my bank account or or or… :)

In the evening we relocated the car direct on the restaurant parking. As we are customers now :) From here we had a direct view, from the front window, from the cliff on the plain in front of us. That was even more great… to lie in the bed and look straight on the lights in the plain.

Also this day was very quite today. We got up somewhen very slowly. The first pilots came also slowly on the mountain. The weather wasn’t that great this morning. Cloudy and a bit raining partly.
For us it didn’t matter. We was in use to shit weather already and we didn’t wanted to fly. Luckily it became better at the end of the morning and the pilots could start.

We was checking in the internet where we could park in Venice, talked a bit with the people and I made pictures. :) 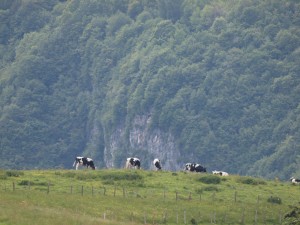 So we went straight there. Direct next to the hotel was the landing field for the paragliding. That’s why it was the favorite hotel for the pilots. The food was tasty, even we couldn’t order half of the menu. The kitchen was already half closed (at 2pm.). I’ve ordered noodles and got Gnocchi. Was very jummy, but for 8,50 Euro was it a very small portion. I didn’t got full at all, but at least the first hunger was gone.
And after I enjoyed the nice and clean toilet (sounds strange maybe, but in Italy they have usually the squat toilets… and public toilets are usually not really clean… then you’re happy about a usual and clean toilet). :)

And then, after a quick chat with Julias fly-school people, we went back on the street… direction Venice.

Inge has the option to give the drive a selection of several routes. She was showing me 3 different options. I was choosing this time another then the preselected one.It was an interesting decision. Because with this route Inge was leading us just a few kilometers later on field roads. I was thinking already that Inge is going mad. But I followed her instructions (couldn’t do anything else). At least we saw the nowhere of Italy. More in the middle of nowhere was not possible anymore :) We even had to drive through a (small) river. (I have it partly on video.)
But the Kangaroo managed everything very well.
Some when we came back on a normal road. We just ended up in the rush hour traffic. It was very busy and we needed again more time then Inge estimated.We also had to stop for the 5. petrol refill. It seems like in Italy is every petrol station doing their own prices. Even they belong to the same company. The best is to check a few petrol station to get a price range and then choosing a cheap on. We saw a range from 1,60 to 1,80 Euro in a circle of around 20 km. We got a petrol station with 1,70 (the 1,60 we saw first later). 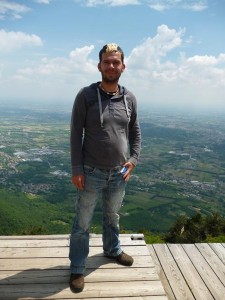 Gordon on the mount Grappa

And then we drove in direction to Venice… sometimes faster, sometimes slower. But Inge told us the way. And then we arrived in Venice.
Very strange to drive there. For most of the people (incl. me till a few days ago) is Venice just the island, with all the canals and no cars. But this is just a part of it. Venice is also on the main land. And this most of the people don’t know.
A few minutes later we was standing on the camping place. I almost missed it. It is in a dead end road, which starts in a roundabout and just a sign is mention it. But we saw it and found the camping place ‘Venezia’.

And we was lucky. The check in is closing at 8 pm. We arrived 5 minutes before 8. Lucky us. 28 Euro per night for 2 people and a car (good that we sleep in the car). Wlan for 2 Euro per 24 hours. The washing rooms are clean and new (shower, toilet (normal ones ;) ) and sinks). There is even a washing machine and a room to wash the dishes.
After a short visit at LIDL (800 meter around the corner), we prepared our bed and got straight in.

It was Julias first night on a camping place ;)

Gordon on the Mt. Grappa

The view from the Mt. Grappa by night.