We woke up wonderful this morning. Around half past 9 we was out of the bed. Really early for us. We took it easy… took a shower, was eating breakfast and wasted some time. Around 12 we was finally ready for Venice. Quickly buying bus tickets, direct on the camping place and then to the bus stop. The bus drove us direct on the island, till the last station.

Our first target was the hostel. Because we went with 2 backpacks and it was the best to bring them first to the hostel. But the hostel is in the middle of the city. Like that we got the first impression of this famous and amazing city. Well, I’ve been there already 2 times, but for Julia was it the first time.
Inge was leading us again the way. And even with Inge we got lost on the last meters. It is really easy to get lost in this city.
At the end we ended up in a dead end and had to go around 3 corners before we found the hostel finally. 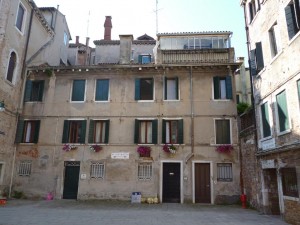 It is a very common building, between all the others. Just a small sign on the door shows ‘Casa Rosetta’. We rang the bell and someone was looking out of the window. We didn’t booked it online. A Chinese Lady opened the door. The owner of the hostel. We was a bit surprised about Asian owner, but ok. We are international. :)
And they was very nice. We even got the double bed room for the cheaper price. I think they thought that we are a couple :)
The hostel is not big. As far as I saw it have 3 rooms. Our double bed, a 4 bed room and in the 3rd I didn’t had a look. The price is also great (for Venice). We paid 23 Euro plus 3 Euro city tax. So 26 Euro per night and person (inclusive breakfast). It is just 5 minutes walking from the Rialto bridge. (Hostel ‚Casa Rosseta for Backpackers‘, San Polo 1108 (Campo S. Silvestro (der Name des Platzes)), Venedig)
The owner was just quickly cleaning our room and then we could move in. Changing clothes, repacking the backpacks and then we went out again. It was around 2 already and we wanted to explore the city.

I can’t exactly tell where we went. Criss-Cross trough the city. Just following our nose and a bit the map :) First of all over the Rialto bridge, of course. Then to the St. Mark’s Square and then further, following the water. On the way we was walking through a park in which was the exhibition of the ‘Museum of Everything’, which we visited as well. And then further… this exhibition, church, cathedral and other sightseeing points… until our feeds started to hurt and we decided that it is time to go back to the hostel.

After a short break we went straight out again. We wanted to eat something on the canal Grande. It was just around the corner and there are several restaurants. We was choosing the restaurant ”Canal Grande”… how fitting.
We was choosing this one, because it was advertising with the best offers. A normal pizza for 8 Euro. A good price for Venice. 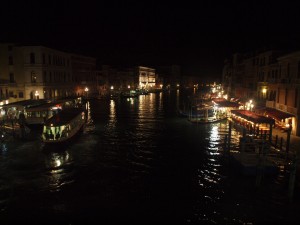 But I decided to order Gnocchi again, which was so jummy in the hotel. Julia ordered first and was choosing one of the cheap pizzas. An the waiter told her to relocate then, if she like to order one of this pizzas. The tables on the water are reserved for customer who order from the menu (means the expensive meals). The cheap pizza eater have to sit on the cheap places. … And he was absolutely serious. Unbelievable… and that is what we did… we couldn’t believe it and thought it was a joke.
Another waiter said something to our waiter and in the mess I ordered my Gnocchi (from the card) and we just stayed on that table. My 5 Euro beer was also not very cheap.
Later we asked the waiter again if he was serious with the table thing and he said ‘Yes’ and tried to explain it… really? 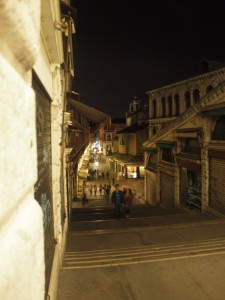 After our late meal, we walked through Venice by night.But my feet was still hurting and it was just a small round.
Venice by night is even more amazing then during the day. All the tourists are gone and it is much more quite. Quite enough to enjoy the city much better. The only light in the streets are from some lanterns. It’s mystical. Just wonderful. It was a great decision to stay over night on the island. Just pity that our feet didn’t wanted anymore.

The round trip ended on the hostel again. On the place in front of the hostel was some teenager partying. Maybe with a reason, maybe just to enjoy a Thursday evening. Who knows. But they was entertaining half Venice.
We didn’t cared. We was so tired that we fall asleep even with this noises in front of the window.
It was a great day in this amazing city. And tomorrow again :)

Unfortunately was the night not so relaxing. I woke up in the middle of the night, don’t know why. But could fall asleep very quick again. And in the morning at 7:30 was the night over. The worker started their work on the place in front of the window. I couldn’t sleep anymore with this noises. But ok, at least we was – more or less – early awake and had more time to explore the city again. 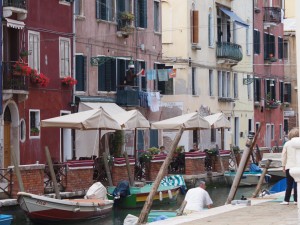 Around 9 we went for breakfast. The other both Chinese girls, which slept in the hostel, was also at their breakfast. I even got a coffee. Great. It’s seldom at the moment, that I get one in the morning.
After we eat a bit and had an intercultural chat, we packed our stuff and left the hostel.
This time we had to carry all our stuff with us. And we was shopping yesterday. :( The first place to go was a post office. I bought a Venetian mask for my mum, and needed to get rid of the parcel. Luckily we passed the post on the way to the St. Mark’s Square. To send a parcel is no problem. I just hope it will arrive in one piece. And we bought straight a hoard on stamps for our post cards.

And then we arrived again on the St. Mark’s Square. Julia wanted to get full of Pigeons (which are in thousands on that Square and just wait for tourists who feed them with bread or corn). Julia bought some bread on the day before and started straight to allure them. But more then 3-4 didn’t wanted to sit on her, in the same time. And I made pictures of it :)
Until some people in orange came and told us that it is not allowed to feed the birds there. The St. Mark’s Square police… so we had to stop it and went to a shadow place to have a rest.
We made a plan where to go next and what to see. The new target was the Jewish ghetto of Venice. And on the way was several other sightseeing places to see. Lets go. 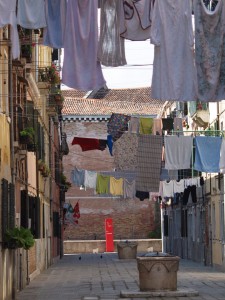 On the way we got several times lost. Even with detailed map and Inge. But finally we arrived in the Jewish ghetto. Here we made a break to relax and to enjoy a great Italian ice cream. It was a great sunny day, with at least 25 degrees in the shadow. Weather to start to sweat and to be lucky about a nice ice cream. ;) 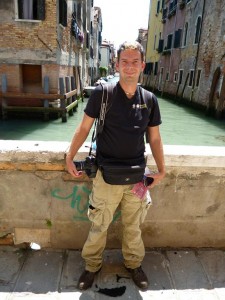 On the way to our bus station we was visiting another 2 churches. The bus no. 19 brought us back to the camping place, where we relaxed our hurting feet and was washing our laundry. And most important: relaxed.

I also used the (fucking slow) internet connection on the place. I found some mails from my customer… who was telling me that I have a lot of work to do. Work for several days… on a normal computer. Well… will see what it will be. Sitting days and working wasn’t in my plan. Especially is our time schedule tight as well at the moment.

another day where we did nothing much. Actually I planed to work in the morning a bit and then leaving the place. At 1 we had to be out of the place. But as I thought needed the work more time and we decided to stay on the place for one more day. As we have here internet (which was now during the day much faster) and good toilets and a shower.

So, that was all we have done today… I was working. In between we was quickly shopping at LIDL, as today is Saturday.

But tomorrow we go back on the street. Further to San Marino. After Florence, Pisa and then further to the west.