yes, we stayed for one more day. The internet, the shower, toilets and a bit relaxing was a good argument. We did nothing the whole day… except of swimming in the sea in the afternoon. 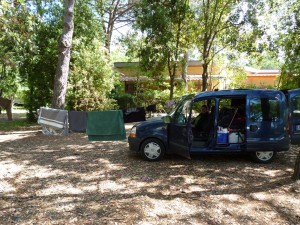 The camping place Campo dei Fiori was not direct on the sea, but just a few hundred meters away. We drove to a closer parking place and went to the beach. Of course I had my mask and my snorkel with me. :) And then we went straight in the water. It was warm already. We had to walk a while till we reached deeper water, which was straight cooler. And there was nothing to see. A few mussels, crabs and little fishes.
After the swim we took a sun bath and relaxed again.

In the evening we had disco again in front of us. :( 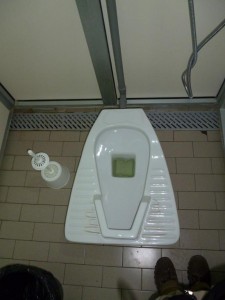 Today we planed to drive further finally. Next target: Monaco.
We wasted the time like always. A bit more internet usage and there a bit playing around. And I tried this strange squat toilet… well, unusual. But it has also advantages. No disgusting toilet seat, where who know who was on it before. You don’t spend, unavoidably, hours on toilet. :) It’s not so possible to make a ‘mess’. And still it is not that uncomfortable as I thought.

It was almost 11 when we finally left the place. Quickly payed our charges. 38 Euro for 2 days. That was ok. And Inge told us then where to go. First of all to the last post office in Italy. Because Julia needed to send postcards and she had still stamps from Italy. That wouldn’t work in France anymore.
And then the surprise, Inge told us that it would be still over 400 km to the French border and the estimated arrival time would be 20:30. It was clear that we wouldn’t arrive in Monaco today anymore. 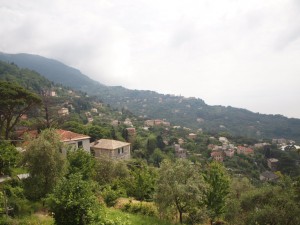 It became even worse as the streets was crowded and the estimated arrival time was calculated later and later.
Genova was really stress. Inge was leading us always through the middle of the cities… always. Through every town we had to go. But on the other hand we saw often also the sea and I think I don’t need to mention: The landscape was very beautiful.
But especially on the upper west coast is one town to another town. It’s basically just one big town there. Which also means always a speed limit of 50 km/h. Now it was clear why the estimated arrival time was so late.

In Genova we had to refill our Kangaroo again. I stopped at the first available petrol station. 1,81 Euro per Liter was written on the sign. Expensive… but I saw it a few times already in the last days. The owner came and was filling our car with 40 Euro, as told. I payed with credit card and back in the car we realized that he charged us 1,86 Euro per liter. I thought already that he was cheating us. But we got told later that in Italy they charge 5 cent extra per liter when you use service. Great. 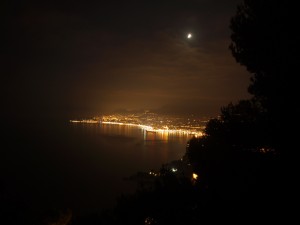 Around 9 we started to watch out for a sleeping place. As we didn’t found anything till 10, we just drove up a hill, in the hope to find a pleasant place with view. It was ascent sharply and with sharp curves. Finally we found a small cemetery. In front was already a car parking. A small camping car … from Germany. Surprise. :)
3 guys from Garmisch had the same idea as we had. They wanted to stay here over night. We started a chat and found out that we almost have the same routing. Strange where you find people from your country which have the same idea as you have :)
We will stay here tonight and hope that nobody will shoo us.Tomorrow we will head forward to Monaco. We will see how long we will need for the last 30km and how it will be in Monaco…. at the pretty folk. :)

and I can straight continue. :)

We had a good night between our new friends and the cemetery. And nobody came to shoo us. We came good out of the bed. I think short after 8 was it. We drove before the guys, but which was already half past 10. First of all we needed a cafe, that Julia can write her postcards, to send them with the Italy stamps.

We went to the last cafe before the French border. Close to it was also a Post office. To write the cards needed also till 12. Then quickly to the post office. I could get finally some money again (again is good…) and Julia could send the postcards.
Just a kilometer further was the French border. But except of the customs office is nothing left from it. We just passed it and that’s it, we was in France now. But our target was another country, which is just a few more kilometer behind the French border: Monaco. 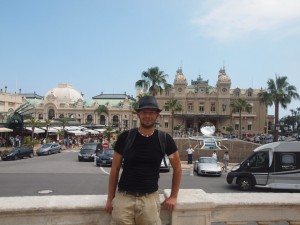 Here was just a small sign on the street: Monaco. That’s it. We crossed the border to this small country. I almost didn’t realized it, with this stress on the street. But it is easy to realize that you are in Monaco. The first building which I saw was a pompous casino. A curve further we was in the middle of Monaco. It is hard to describe how it looks there. I would say all is more beautiful, bigger and pompous. … And more expensive.
We drove first just through the streets. Inge had no maps and Uschi (Julias navigation system) doesn’t have POI’s and does not know parking places or anything else. 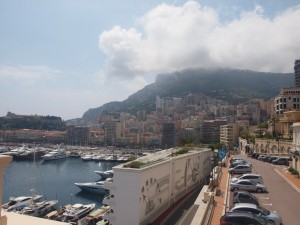 Finally we ended up in a parking house. There was even maps of the city for free. We ended up at the wrong end of the city. Well, wrong is maybe not the correct word, in a country which you can cross by walking in a few hours. Just at the end where nothing goes on. So, we walked in the right direction. It was just 2-3km to the interesting part. We passed on the way another pompous casino, several (fuckn) expensive shops, passing the harbor, in which are the yachts of the rich folk. After a cappuccino for 3,50 Euro (small one of course :) ) and an ice cream, we went back to the car.

It was around 5pm. The parking ticket was 10,40 Euro (was ok) and then back on the street in direction to St. Tropez. We found a cheap petrol station on the way and filled up the Kangaroo for 1,56 Euro per liter. In compare to the last Italy petrol station for 1,85 Euro was it really cheap. 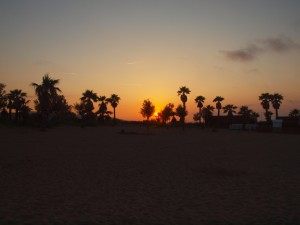 We was following the coast – more or less – and came through Nice, Canne and some other cities on the coast. Again stress on the streets (especially Nice and Canne).
Also the technique was not working as expected. The GPS tracker on my mobile told me that it is working, but it wasn’t. Now are many points missing on the route. Also Inge was not working well today. She lost always the GPS signal.

But finally we arrived somewhere. We are now on a beach somewhere before St. Tropez. The beach is direct on the main street and the parking is during the day fee-based. But now is nobody there to charge us.
But here are still people running around. It looks like a varied mixture. Young couples looking for privacy, fathers which looks after their daughters and families with children. Plus a few bored teenagers. I am looking forward to the night.

Our route (please move the map with pressed left mouse button till it fits)::