today it’s about the subject solar energy for outdoor, backpacking, camping and even at home.
I was thinking a long time already to get a small solar system. I think it is a big advantage if you are not reliable all the time on a socket. Especially when you are camping or backpacking and you are not even close to a socket for days. How to charge your mobile, camera, laptop, torch, etc.?
The only possibility, mobile electricity.

The wish came even more on my trip in north Cyprus, 2 years ago. When I was camping in the middle of nowhere (nature protection area). There I had the situation that I didn’t had socket anywhere. Soon my mobile, my camera and all other electrical stuff was running out of battery. Luckily I found a possibility to charge my devices from a socket. But if I wouldn’t … I would sat in the dark, without emergency call possibility and without camera.

Anyway, I was thinking now a long time already what would be the best solution. Nowadays there are many seller on the market. And even more products.  Which one is good? Which one fits for my needs? … I am not an expert, help!

So I started to have a closer look onto this systems and technique (even I have no idea about this solar stuff). There were just a few market leader around, when I had the first time a look around (2 years ago). Now is it, as I said, different. Now there are many products. And even before they was advertising the products already with the promise that they can charge mobiles, iPads and even Laptops/Netbooks.

After a bit reading in the internet I became suspicious. How can a 10Wp solar cell charge a Laptop? Is it even enough to charge a mobile=
I was reading in several forums and websites and they said always that the current solar systems are not strong enough. At least not for Laptop or Netbook. In the best case a tablet. Mobile or batteries wouldn’t be a problem with most of the solar systems.
So my confusing was even bigger.

Now we went to the big Road Trip and I’ve known that Julia, my travel buddy, had already experience with the solar company ‘Sistech Switzerland’. And we wanted to visit Switzerland anyway. So we planned a stop at Sistech. It was almost anyway on the route. 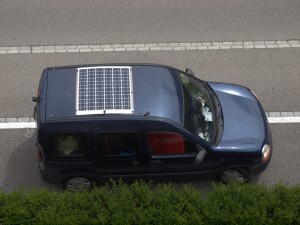 I need to say that Julia was buying before our trip already there. Our car, the Kangaroo, got the biggest solar cell of the company. The ‘Solarlite “Dieci”‘ is the biggest solar cell in the product range, with 18V and 126W. The cell on the roof is connected with a charger controller with a second battery in the car and is supposed to supply to cooling box and to charge several devices. And like that it happen.
We didn’t had the time to connect the second battery to any other supplier source (as we wanted to do it). It got charged only by the solar cell.
And I can say it in advance, the battery was never empty, but also just 2 times full.

So, we visited on our trip the company Sistech in Bubikon-Zurich.
Julia was with the stuff familiar already. She know them better than I thought already. :) She bought earlier, for her Asian trip, solar panels there already.

The people from the company were really nice. The manager – by the way also a Hugo ;) – spend a lot of time with us that day. I wanted to know it now really clear. Is there a system which fits my needs. It has to charge all my batteries (cameras, normal batteries for flashes and torches, mobiles and of course also my netbook). Plus the system should consist also a buffer memory (a big battery), if there is no sun or it is just night. And this buffer has to be big enough to charge the netbook at least one time completely fully and to get charged from the solar cell very quick (as less hours as possible).
Hard needs to a solar system. 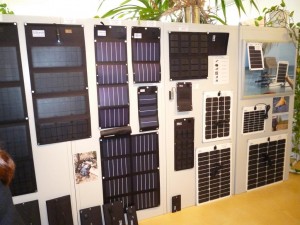 As I said was Hugo very friendly and took a lot of time for me to answer all my amateur questions as best as possible. It was logical for me that it is not possible to say “This solar cell is charging this buffer in 2 hours full”. Solar energy relays on the sun and it’s power. Are there clouds in front of the sun, then is the gain much less and the buffer is charging slower or not at all. Also the angle to the sun is very important for the gain. The best angle is cell to sun = 90°.
But first of all he was showing me the buffer batteries. The company have a big range of this buffer batteries. From 4400mAh/16,3Wh till 24000mAh/88,8Wh. The biggest was finally my choice. It was big enough to charge my netbook and there would be even power left to charge a few other devices.
Now I’d need to find the right solar cell, to charge the buffer in a proper time.

The range of solar cells is even more big and varied. There are small, big, foldable, stiff, light and heavier solar cells. And every type has different features. Small and light means also less energy. Big, stiff and heavy means of course also more power. (It is always like that in the life.)
So I was choosing the best compromise product. The solar cell ‘Solarfold “Volta”‘ with 17V and 46W (max). There would have been a lighter alternative, the “Chepre”. But this would have had, at approx. the same size, just 18V / 18W. But therefore it would have been a lot lighter and better to carry on a backpack (530g VS 1,6kg).
But for me was the most power important. If I really want to go trekking one day, then I still can buy something lighter.

We was also straight looking if all of my devices can be connected to the battery and if I have all adapter. Except of my new pocket camera I had everything and was now ready to charge my netbook, the DSLR camera, batteries and everything else with the solar system. Great! :)


Now I went with my new solar system on the road trip, through whole west Europe. The first time I used it in north Italy. I was hanging out the solar cell in the morning and connected the buffer battery. The sun was strong that day. It needed good 5 hours to charge the buffer full.
Of course it was first of all totally genius to see how the sun makes electricity. How it works… magic. :) That’s why this day didn’t count… it was emotional. :) 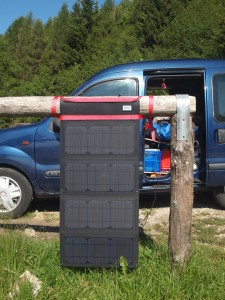 Quickly I realized that on a road trip are not many possibilities to use a solar system. We wasn’t standing often hours around, that I could put the solar cell somewhere and watch it all the time. We was driving a lot and walking around. Also during the driving I couldn’t use the cell, because in the car is mostly no sun. Just Julia was putting her small cell in the front window and was charging with it her small buffer battery. My big one was most of the time stowed away.
However, from time to time I could use it. For example when we parked somewhere longer or we had a lazy day. Mostly I was putting the cell on the roof of the car or on the engine cover and charging the buffer battery like that. But very seldom we had the time to charge it completely. So I had to stop from time to time at Mc Donalds to charge my netbook from the socket. But for my mobile was almost always solar energy available to charge it.

And now the surprise. Back at home in Cyprus I’ve tried the system proper again. The buffer battery was at 0% charge. I was putting the cell in the morning in the sun and was waiting till the battery was full charged.
And now the time: I started it at 10am and full was the battery at 1:15pm. So the solar cell was charging the 88,8 Wh buffer battery one time completely full in 3:15 hours. That is not bad!
But I need to say fairly that it is now summer in Cyprus and the sun here is really powerful. On the other hand I wasn’t careful about the angle to the sun. I guess if I would put the cell in an ideal angel to the sun, then the cell could charge the battery in 2 hours.

I am loading now also at home my small devices (e.g. mobile, tablet pc, batteries, etc.) only with solar energy.

The market is big and it is good to have a VERY close look on what you buy. Very often are the big advertised offers just junk. I know now that it was a good decision not to buy one of these ‘supermarket mega special offer’. Quality has its price and especially here is quality important (except you have 5 days time to charge your netbook). But therefore you can get nowadays good products already.

I am still surprised how good it works and how we could charge our electrical devices, far from every socket. Just with solar energy.
I think I will also buy the lighter cell, because I don’t want to have 1,6kg hanging on my backpack, if I want to make one day a backpacking tour.

Along these lines I also would like to thank Hugo and his ladies for the lovely and great advices (and the coffee). Thank you :)

Who the hell is Hugo?