sometimes I get some really crazy ideas. And the craziest ideas are mostly the best :-) But unfortunately are this ideas too rare. :(

However. I was thinking a while ago about this and that… and somehow I got the idea to sleep in the castle Buffavento. The castle is located in the Kyrenia mountain range, in north Cyprus. Here in the south are no castles at all. :(In the Kyrenia mountain range are 3 castles. St. Hilarion, Buffavento and Kantara. But the other both are controlled and you need to pay entrance. So it is not that easy to get in. Buffavento is abandoned. Nobody wants entrance and the castle ruinous slowly (it is the one in the worst condition). But it could be also because the way to the castle is the hardest. Approx. 30 minutes (more or less) climbing up the hill. 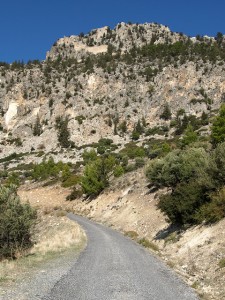 Therefore is the castle on the second highest mountain in the range and the view is just awesome. When there is a clear view then you can see the whole valley between the both mountain ranges. Inclusive Nicosia and even Famagusta in the distance. On the other side of the mountains you can overlook half of the north of Cyprus (with Girne ‘in front of the door’).

I was visiting the castle already in 2011 during my ‘I AM’ tour in north Cyprus and could remember the great view.

So, I had this idea. And I’ve known it will be amazing… Even I wasn’t sure if I can just sleep there (with tent). But hey… nobody is controlling it… so let’s try.

So, I went last weekend. Quickly picked up Bengi, a friend from the north. As pair makes life more fun ;) And we went to the castle. Somehow was the way longer than I thought. The street to there is also an experience to make. The street as wide as approx. 1 1/2 cars (small cars!)… on the right side rocks and left the abyss. But a great view on the side of the abyss… and I pray every time that no car is coming! …

But we arrived soon on the parking below the castle. We was just eating quickly a sandwich to get some power and then we got our backpacks done.
Of course I packed proper… all I need to remember. Tent, several torches, batteries (incl. my solar tank), warm clothes (for the night), sleeping back, a mat (because of all the small spiky stones… not good for the airbed), airbed, another thin blanket, 3 bottles of water, sandwiches, cookies, beer, first aid kit, tablet pc (for music), several cable… and so on. So, all we needed. And it was heavy. I would guess that my backpack was around 15 kg.

And then we started the walk, up to the castle. Unfortunately I had the way much shorter and easier in my memory. Bengi was gasping for air after half of the way and I took her bag as well, so she had just the backpack. But short after that also my legs started to hurt and felt like pudding. It doesn’t look that bad from down. But the way up ascends steeply and was wriggling through the mountain, which made the way even longer.

But then we reached… some when… the target. We stepped into the castle Buffavento. A 1000 years old building in which nobody was living for a long time (that is at least what I told myself) :)
And we would sleep here tonight. But first of all we had to climb 140 more steps, to the upper castle. Up here, in the highest building, we wanted to stay. From here we had the best view. :) 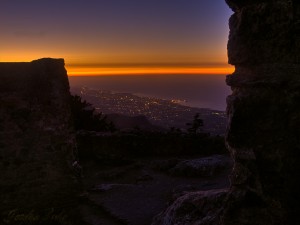 It is hard to put it in words what we experienced up there. Starting with a stunning sunset (and I mean stunning), direct behind the mountains. It’s a feeling as you’re direct inside. The sky becomes Orange and everything around (and there is a lot around) is sinking first into the sunset then then slowly into the night.
The view up there is just amazing. You’re there direct on the mountain crest. Left is the valley between the Troodos- and the Kyrenia mountain range. In the middle Nicosia. And on the right side the north side of Cyprus with Girne and all the villages around. We had a clear view this night and could see until Famagusta.
And when it became dark, the world around us started to shine like fairy lights on a Christmas tree. Nikosia is a really big city (for Cyprus circumstances) and it seems like it is filling up in the night the whole valley. In the north is Girne spreading his lights. And from the sky the stars (it was almost new moon). That is a dreamlike atmosphere. And while watching it drinking a beer and talking about god and the world…. unforgettable moments.
Especially when you get always remembered that you are in a real castle, where earlier people was living. Now is it quite there, very quite. The only sound up there are the bells of goats and every some hours the Mosque. 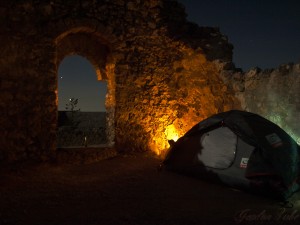 It was a great idea to do that. Really, that are moments which are hard to explain to someone who have never been there.

The night became windy. Buffavento is named by the Italian Words buffa di vento… which means: “Defier of the Winds”. And it can be really windy up there… from all directions. But we had luck and the wind wasn’t that strong this night. And it came from the north, so we was protected by a thick wall.

We missed the sunset. :) But at 8 was the sun up and was shining on our tent and transformed it into an oven. After a few minutes we couldn’t stand it anymore and got up. In the right moment, because the first tourists came approx. half past 9 to see the castle. So, we got up in the right moment. :)

And because it was so great, I went this weekend straight again. This time with Hugo, which I forgot last weekend. And this time I was pant even more then last week. I always thought it will be easier each time… I think I was wrong. :o But it was the last time for now that I went up to Buffavento. Now is it time to get new ideas. Any suggestions? :)

And below a few picture of the adventure :)

And a small video of a bit poor quality: