Once again a small story about one of our photo trips. This time with a lot of adventure. Lets see if I can put it in words. :)

Actually there was a Couchsurfing meeting planed on friday. But then my friend got told that she have to work on Saturday and also nobody else was suppose to come. So, I also canceled.

I called Christos, to see what is going on there. He had another plan. To go in the mountains, to an old abandoned hotel, camp there and Saturday exploring some abandoned villages. Sounded like a great idea. It was late already… but if we would hurry up, we could make it to the hotel until sunset. 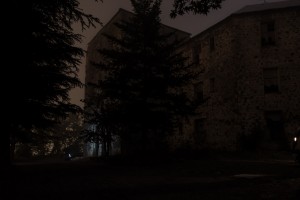 So quickly finishing the job, packing the stuff and get a move on. But the other 3 wasn’t ready either yet. Around 6 we finally started. First stop petrol station, then shopping a bit and on the way in the mountains. Fully packed is my car even more weak. It was a slow drive up there. :-(
We reached the abandoned hotel Berengaria after the sunset. But we could use the last light to make quickly some shots in the blue hour. 4 photographer :)
Then it became more and more dark… until we were standing in pitch black night. And one thing I can say… the hotel is damn spooky in the dark. From outside it’s still ok. But I made some shots in the pitch black inside of the hotel… there you start feeling a bit strange. But check out the pictures down, then you maybe know what I mean.

The hotel was build in 1930. It is mainly build with natural stone. It was so glamorous that it was called ‘Hotel of the kings’. Also was it the first one in this area of Cyprus.
It seems like nobody really knows what exactly happen to the hotel. The rest is just legend. The legend says that the very rich owner had 3 sons. After his dead the family property, money and the hotel should be divided equally between all 3 sons, so that there will be no fight and no problem between them.  All 3 should own the Berengaria hotel.
But after the father died, they had forgotten all the good intentions and the 3 brothers started to fight for the money and the hotel. All 3 died in strange accidents within 3 years.
Nobody was the owner of the hotel anymore, after they died, and the people were burglarizing the hotel. All what is left now are the blank walls.
People say that the ghosts of the 3 brothers are still in the hotel.

We slept in the night right next to the hotel. In our tents. We haven’t seen any ghosts. Maybe they where so good to be quite in the night :) 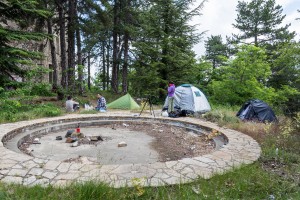 We got up late in the morning. I got out of the tent around 9:30. I was the last one, of course. :) First of all… coffee and a cigarette… and then starting the day slow-paced. Around 11 we were all back in the car and ready to go. It was planed to visit more abandoned places today. But the first stop was just a few minutes from the hotel away. A abandoned (of course) house. It looks bad from outside already. Broken windows, doors are open, every piece of metal is rusting and the gardener wasn’t here anymore for at least 20 years.

Already when I was surrounding the house it was clear, this house is special. And it is special because it must be abandoned for years already, but there is still everything in the house. Everything. The rooms are fully furnished. In the kitchen are still bottles (I didn’t checked if one is still closed). Even bulbs are still in the sockets. And also clothes are still lying around. Of course, everything is in a very bad condition. But whoever was living here, must have been left in hurry. And somehow nobody seems to be interested to plunder the house in all the years. For us photographer is it of course a welcome target to make some good pictures :)

And then we went on in direction to Vretsia. It’s just approx 30 km west from there. The normal street would make a huge diversion. We decided to take the across country route. My navigation system tried to lead me that way straight away… couldn’t be that bad then, was my thought. Just goes to show you never know. 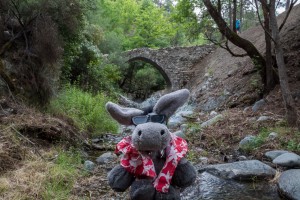 Before the village Foini we had to take a turn. Down from the main street. There is even a sign to a venetian bridge (Elia bridge). Cool, then we also see some venetian bridges.
Just a few hundred meter later the asphalt road changed to a concrete road. Another few hundred meter later the concrete road ended and we were on an dirt road… literally. And then the adventure started. (We decided after a few kilometer that we will not say anymore ‘it becomes worse and worse’… we call it now ‘it becomes more adventurous’ !!)
5,5 km until the bridge. Our average speed was around 20km/h. Partly just 10 km/h. Wheel ruts so deep that a axle fracture is granted at 30km/h. I think we needed an hour for this 5,5 km. Then, 200 meter before the bridge, we came finally back on an asphalt road. And we reached the first bridge. The Elia bridge. A quick stop, some pictures and we moved on. Just a few hundred meter down the street is the second bridge. The Tsielefos bridge. 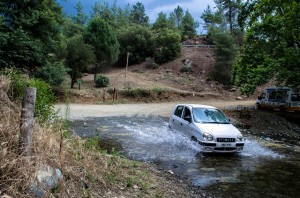 Then we had the next great idea. Direct from this bridge goes a ‘street’ further to the 3rd venetian bridge and from there to Vretsia. Problem no. 1 is that the street goes through the river. I saw once here how a quad got washed away when it tried to cross the river. But that time was more water in the river. At the moment was the water level lower and the river quite calm. After thinking back and forth I decided ‘Ok, lets try it’.
So I went back to the car, took a run-up (as much as possible) and… crossed the river without problems. The other people around looked a bit stupid and my car was a bit more clean again :)

Unfortunately was the street the same shit as before. Actually the real adventure started now. 25km on a dirt road. Ok, the navigation system knew this street (really surprisingly … I recommend to everybody to check where your navigation system is leading you!). I was hoping that it will not crash down. We would have never found back. But even more I was worried about my poor little car. And I kicked my ass that I didn’t took the GoPro with me to record THAT on video.

Wheel ruts and partly steep hill downwards with up to 40% (no joke). We were driving on forest fire prevention swaths. Once I took the wrong turn and had to turn around. Did I mentioned that we were driving on a dirt road? Most of the time a cliff on one side. The road wasn’t always wide enough for 2 cars and of course no crash barrier. 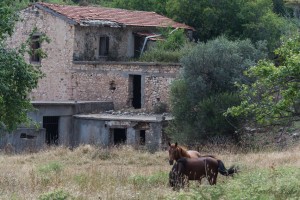 After another hour with 20km/h we reached finally Vretsia. We were hoping to find a restaurant there. We were so damn hungry. But we found with Vretsia our first abandoned village. It must have been a Turkish village. In the middle of the village is an old little mosque. Surrounded by normal houses, a villa, a school, farm houses and a restaurant, in which still someone is living. Self made cheese was hanging from the roof, to dry out. We could hear goats in the valley, a huge pig was standing around there and even 2 beautiful horses were on the meadow.
After a photo excursion we went further. The road became better finally and in the next village we found a cafe. They had just chips, but at least something. Plus a coffee :) We spend a bit time here and had a rest… until we were heading to the next location. The old abandoned Axylou. But except of another dirt road was nothing to find here.

After that it was to late and I wasn’t in the mood to torture my poor car more. So we went back home. But we had a great day. With a lot of adventure. :)

And as always… some pictures…

I’ve been to a classical concert… never call me philistine again...